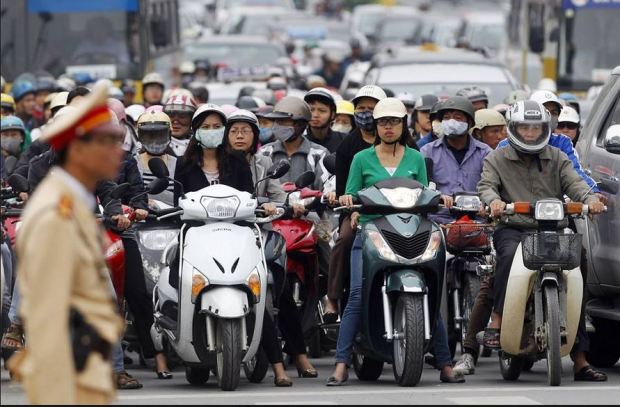 Arve Hansen’s excellent PhD thesis on the transition from bicycles and walking to motorbikes and cars in Hanoi is available here bit.ly/2MJEPOU. Thanks to Javier Caletrío <jmontfra@hotmail.com> and our friiends at the UTSG for the heads-up and to the Mobile Lives Forum for the following texte excerpts from their summary presentation at  </jmontfra@hotmail.com>http://bit.ly/2Np3BJB

1. What is your research topic? What thesis are you defending?

* Interview with the author, Arve Hansen of the Center for Development and the Environment, University of Oslo.

My overall research topic is consumption and development, and I am particularly interested in changing consumption patterns in contexts of rapid social and economic changes. In my PhD thesis I studied the transition from bicycles and walking to motorbikes and cars in Hanoi. In other words, I studied a transition from very low-carbon mobilities to high-carbon mobilities. I approached the topic at the intersection between macro-scale processes of economic development and everyday mobility practices. And in Vietnam’s capital city, understanding contemporary mobilities first and foremost requires an understanding of the motorbike, a so far surprisingly understudied vehicle in the mobilities turn.

Motorised two-wheelers come in a range of shapes and sizes, from large motorcycles to small mopeds. In Vietnam, they are usually the latter, and they are generally all referred to as motorbikes. I will leave it at that. The main point here is not what to call them, but what all motorised two-wheelers have in common: they have been largely neglected in the ‘mobilities turn’. If they do figure in this literature, it tends to be as a form of alternative mobility in car-dominated societies in the ‘West’. So far, almost no research has taken seriously the crucial role the motorbike plays in the daily lives of hundreds of millions of people around the world.

In Southeast Asia, motorbikes are found everywhere. But Vietnam breaks all records. Since the economic reforms known as doi moi were initiated in 1986, Vietnam has been transformed from a country of bicycles to a country of motorbikes. Now, there are perhaps as many as 50 million motorbikes in the country. Indeed, already in 2012 there were on average more than 2,5 motorbikes per household in Hanoi and Ho Chi Minh City. The speed of the transition from bicycles to motorbikes has been astounding. Studies have found that in 2005, more than one-third of non-walking trips in Hanoi were covered by bicycle, while a bit more than half of trips involved motorbikes and only one percent cars. By 2012, two-wheeled transport still represented 85 percent of total traffic, but 96.8 percent of this share was represented by motorbikes and only 2.6 percent by bicycles (the remaining 0.6 percent were electric scooters 1) .

Vietnam has thus transformed into a motorbike society, something that is obvious in the streets of Hanoi. In a short space of time the motorbike has come to play an absolutely vital role. The streets are full of small motorbikes, humming, honking, braking, accelerating. They are all around you, forcing you to consider every step while engulfing you in a constant buzzing sound, as if you had entered a gigantic beehive populated by oversized, mechanical bees. They make crossing the street a seemingly insurmountable task. They make sidewalks impossible to walk on. They make the air dangerous to breathe. Indeed, traffic is so challenging that a large number of online user guides for tourists on ‘how to cross the street’ are available.

But most importantly, the motorbike is what makes the city work. It is used to cover more or less every mobility need; to transport impressively large items, to commute to work, to take kids to school, to go shopping, to meet friends, even to go on dates or take the dog for a walk. It is a city of motorbikes.

How did Hanoi become a motorbike society? And how does car ownership emerge in this context of two-wheeled dominance? These are some of the questions that my thesis has tried to answer.