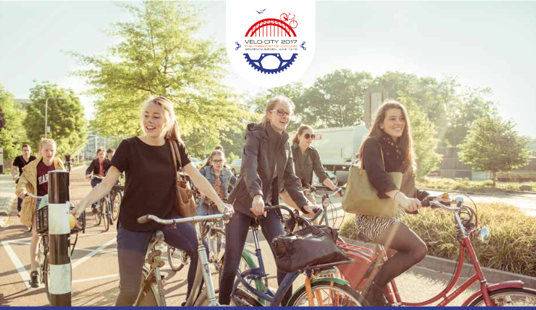 What about women as cyclists at Velo-city 2017?

Benoit Beroud, Mobility Designed for All consultant at Mobiped, attended, the World Cycling Congress, which occurred in Nijmegen (Netherlands) last June. He shares his notes and comments with World Streets after reflection some inspiring thoughts  about women and cycling in their day-to-day lives.

“First impression was given by pictures of the website, program (see above), and flyers of the conference: set of various women cycling. And it is not a misleading advertisement.”

Women ratio among cyclists is a key indicator of how cycling friendly is a city. In Netherlands, 55% cyclists are women. But women represent less than 45 % in population with non-western background. In the United Kingdom, 20 % of cyclists are women. In USA, 4,8% of men are cyclists but only 2,5% of women are cyclists. In Sao Paulo Brazil, women are only 14 %. In France, 2,4 % of men use bicycles as a daily mean of transport for commuting. They are only 1,5 % women who commute by bike.

African women could save energy and time

Cooperation Africa is a Dutch NGO promoting cycling in Africa in rural environment with programs as Bike4school, Bike4care, Bike4work.  Luuk Eickmans showed key figures that really could change life of people leaving in rural environment. UNICEF 2016 estimated to 200 million the number of hours dedicated by women and girls collecting waters. A bicycle can carry 5 times the load than a pedestrian and go 4 times faster. To know more: https://ecf.com/sites/ecf.com/files/LuukEickmans_ABikeMakesTheDifference_0.pdf

Cycling: More than a luxury for a woman with no walking options

Isabelle Clement has been in a wheel chair for her entire life. And only once she was 36, she discovered that cycling was first an option, and second much more than a simple option. A revolution for her that lead her to create the NGO Wheels For Well Being. To know more: http://wheelsforwellbeing.org.uk.

In the Netherlands, “Tour de Force” is a great national training program in the 32 biggest cities toward newcomers, but also children and women (http://www.tourdeforce.nl). This presentation was made by Angela Van Der Kloof. She is a senior consultant and cycling expert for Mobycon, an international consultancy based in the Netherlands and Canada, for more than 20 years. She set up a Bicycle School for women in the early 1990’s at the Centre for Immigrant Women.

Internationally, she has worked with women’s groups in Europe and Latin America to set up cycling schools. She is currently pursuing her PhD in the field of Gender, Cycling and Education at the faculty of Political Science at Radboud University (Nijmegen, Netherlands). To know more: https://ecf.com/sites/ecf.com/files/AngelaVanDerKloof_BicycleLessonsForNewcomersInNL.pdf

« I didn’t want to stay at home » shared one of the member of a Turkish women cyclist NGO. Several of them meet, start to train by themselves, engaged Facebook talks and edited a guideline for women. Each member become then a sister hood for newcomers. Two Turkish women gave a presentation:

• Pinar Pinzuti. She organised the “Fancy Women Bike Ride”, a “women’s activity organized by women for women” that took women cyclists to the streets in 28 cities in Turkey on World Car Free Day in late September. To know more: https://ecf.com/system/files/PinarPinzuti_FancyWomenBikeRide-Turkey.pdf

A western cyclist woman in a Muslim culture

Shannon Galpin travelled in various countries with a Muslim culture. And she contributed to show to males that a woman can ride a bicycle, as well inspiring for girls. She quotes Susan B Anthony (1820 – 1906), an historical women’s rights activist: « The bicycle has done more to emancipate women than anything else in the world. It gives women a feeling of freedom and self-reliance. I stand and rejoice every time I see a woman ride by on a wheel … the picture of free and untrammeled womanhood ».

Women in high management positions in cycling promotion in France

In France, there are many women who oversee cycling promotion:

• Sylvie Banoun , the inter-ministry delegate to promotion of cycling

• Geneviève Laferrère is former director of the French daily cyclists NGO, before becoming the contact of France Nature and Environment.

• Marie-Xavière Wauquiez leads the club of women working in the mobility field.

When I followed the BYPAD training in Graz in 2012, the ice-breaker exercise was to talk about our first cyclist memories. I was 5 riding « as fast as I can » for my first conscious memory. But my mum had a bicycle with an orange rear seat. In fact, my first cyclist experience was a passenger close to my mum, but it remains in my unconscious memories.

On my way to Velo-city, I stopped at the Hague for a pre-visit cycling tour guide. During the night, I met some French au pair women. One of them, 20 years old was not a cyclist in France and became such a daily cyclist, ridding more than 10 kilometers a day with a children in the front and one on the back … with a nasty bicycle.

When a couple get a first baby which requires to carry many stuffs around, the car is often the best solution. In a mobility management process, the city of Basel (Switzerland) has a cargo-bikes program to keep new parents as cyclists. In Netherlands, it was incredible how less-than-a-year babies were carried by bike.

And from the  ECF Scientists for Cycling Network . . .

Scientists for Cycling – The Scientists for Cycling network, launched at the Velo–city Global 2010 conference in Copenhagen, arises from the recognition that there is a large number of experts worldwide in many different academic disciplines who are able and ready to contribute to ECF’s mission: to improve and to increase. More: https://ecf.com/community/scientists-cycling 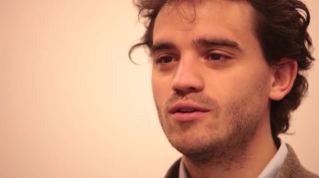 Benoit BEROUD, is founder of Mobiped (http://www.mobiped.com), a Mobility Designed for All Consultancy, France. Swiss knife entrepreneur, mobility management consultant, active mobility expert, information designer, service innovator, defender of universal conception approach and contributor of a coworking focused on social and environment economy.  He created Mobiped to enable human being to move by their own, in a joyful mood and in a sustainable way as much as they can.  He has worked for 80 clients from 16 countries and is certified auditor of mobility policy (cycling, accessibility, SUMP). Can be reached via linkedin: https://www.linkedin.com/in/benoit-beroud-b6090316/ .

Bio: Founding editor of World Streets (1988), Eric Britton is an American political scientist, teacher, occasional consultant, mediator and sustainability activist who has observed, learned, taught and worked on missions and advisory assignments on all continents. In the autumn of 2019, he committed his remaining life work to the challenges of aggressively countering climate change and specifically greenhouse gas emissions emanating from the mobility sector. He is not worried about running out of work. Further background and updates: @ericbritton | http://bit.ly/2Ti8LsX | #fekbritton | https://twitter.com/ericbritton | and | https://www.linkedin.com/in/ericbritton/ Contact: climate@newmobility.org) | +336 508 80787 (Also WhatApp) | Skype: newmobility.)