To be quite frank, to the point and a bit rude, the famed 20th century Swiss architect, designer, artist and general polymath Le Corbusier when he donned his urbanist hat provided us with several striking examples of how to build a city for cars.  We are extremely fortunate that most of them never got off the drawing board. But today, the Danish architect Henrik Valeur tells us about one that did and what perhaps Indian planners and urbanists can now do something to rectify.

Chandigarh was designed in the early 1950s by a team of Indian and foreign architects headed by Le Corbusier, one of the “fathers” of the modernist movement. The city consists of about 60 sectors, most of which have been planned according to the same principles of organisation: a market street and a green belt perpendicular to each other, dividing the sector into four equally large parts. Commercial activities are located around the market street, while public institutions and facilities are located around the green belt. Dwellings are divided into four subcategories located in each of the four “corners” of the sector and served by secondary streets.

Most sectors also have the same dimension, 800 – 1200 m, which is ideal for walking and cycling, while the “rational” grid of roads between the sectors is ideal for car driving though it would also be ideal for trams or a bus-rapid transit system. But as it is, the bus system is malfunctioning, cyclists have to navigate some rather dangerous roundabouts, at each intersection of roads, and pedestrians are in many places prevented from crossing between sectors. Thus, with no other viable alternative to provide transportation between the sectors, cars have proliferated, not only on the grid roads, where they have created congestion, but also within the sectors, where the environment is deteriorating and public space is converted into parking space.

The late Indian architect Aditya Prakash, who had been a member of the original design team for Chandigarh and later became the first principal of Chandigarh College of Architecture, said: “When I was young…we could still use the street for anything that we wanted including sleeping at night. We did not realise while planning urban space that the automobile would be the greatest devastator of a city.”

While Chandigarh was designed in the image of the “modern” European city without much consideration for the qualities of the traditional Indian city, many European cities are now adopting the image of the traditional Indian city that Aditya talked about, i e, fewer cars and more human activities. And, maybe that is one of the great tragedies of our time, that despite all the means and opportunities, we are not very good at learning from each other – one way or the other.

I was invited to Chandigarh in October 2010 to give the Le Corbusier Memorial Lecture and decided to stay for six months teaching at the Chandigarh College of Architecture and working with the students on some proposals for the new master plan of the city.[i] One of these proposals was to make Sector 19 car-free. Sector 19 was one of the first sectors to be developed and it was chosen because of its generic layout that would make the solutions developed here easily applicable to other sectors.

The idea was quite simple. The sector has four entrance points and we proposed to construct parking lots at each of these, two above the ground and two below the ground. Because the entrance points are diametrically located, two at either end of the market street and two at either end of the green belt, the maximum walking distance from the parking lot to the home would be about 300 m. For transportation of physically disabled people, deliveries, garbage collection, etc, we proposed to have a mix of cycle rickshaws and solar-powered rickshaws.

We also proposed to make bicycle lanes in the market street and through the green belt. These lanes would connect to the four entrance points, where there would be safe crossings for pedestrians and bicycles to the market street or the green belt of the next sector. The crossings would be equipped with traffic lights that would also make it possible to control traffic in the notoriously chaotic roundabouts (400 or 600 m away). At the crossings, there could be stops for trams or rapid buses, where people could conveniently get on and off.

By removing all cars from the sector, a lot of space is liberated. It is estimated that about 25% of the total surface area of the sector is currently used by cars, either for driving or parking, and much of it is covered with asphalt. All of this asphalt, which contributes significantly to the overheating of the city, could be removed, and instead, eco-friendly pathways for pedestrians, bicycles, cycle and solar-powered rickshaws could be constructed. These would be much narrower though, still providing sufficient space for emergency vehicles.

The liberated space could be used for communal activities, such as playgrounds, sports fields and community kitchen gardens. Some of it could also be used to accommodate the people who work in the sector but live in villages, slum areas and rehabilitation colonies on the outskirts of the city. If the car is not parked in front of the house, but a few hundred metres away in a parking lot, much more shopping, in fact, many more activities, would take place locally. This would help reinvigorate the decaying market street, which could be made much more bazaar-like. In fact, a lot of space, which is currently used for parking in the market street, could be leased out to commercial activities and this could pay for the new parking facilities at the four entrance points of the sector.

Our proposal to make Sector 19 car-free would, undoubtedly, be met with opposition from some citizens, perhaps not so much because they would have to walk a bit more, but because they would “lose” an important, perhaps the most important, status symbol. Or, as one of the students put it: “If the car is no longer parked in front of your house, why have a car at all?”

We submitted the proposal to the Master Plan Commission in December 2010, and then nothing happened. At least not until September 2011, when the High Court of Punjab and Haryana, while hearing a petition to introduce so-called eco-cabs and discussing the issues of traffic congestion and pollution in the city, directed the administration to declare one of its sectors vehicle-free as a test, suggesting that it could be Sector 17.[ii]

This is the commercial centre of the city, and may therefore be the most obvious to start with as there are many successful examples of making shopping areas car-free from around the world, including, of course, the traditional north Indian bazaar. But because the organisational principle of this sector differs from that of all the other sectors, it may be difficult to use solutions from here in other sectors.

However, in a strange act of rebellion, the administration in March 2012 decided to chop down 60 grand old trees in Sector 17 to facilitate the construction of an overpass for motor transport in the middle of the sector![iii] This came only days after the same administration had told the high court that it had decided to make Sector 17 a vehicle-free zone – in phases (!) – and asked for more time to prepare plans for this.[iv]

Then in July 2012, the administration told the high court that it will not be feasible to convert Sector 17 into a vehicle-free zone.[v] A year later, in July 2013, a draft for the new master plan of Chandigarh 2031 was released. It does not make a single mention about making Sector 17 – or any other sector for that matter – car-free. Though it does adapt our idea of having bicycle lanes through the green belts, but not across through the market streets, so cyclists will, presumably, only travel straight forward.[vi] As for Sector 19, the municipal corporation decided to construct a small jogging path in the park there.[vii] 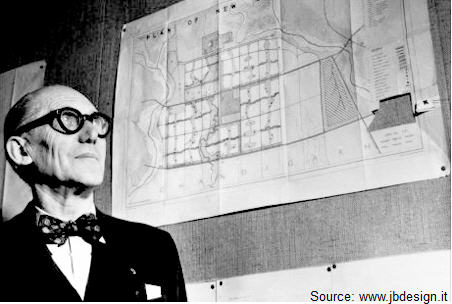 Henrik Valeur is an architect-urbanist, born in Denmark (1966), the son of visual artist Mogens Valeur and fashion designer Birgitte Valeur. His grandfathers were 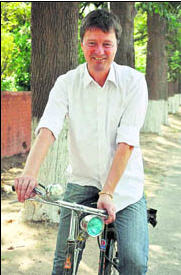 both civil engineers. Henrik graduated in 1994 from the School of Architecture in Copenhagen having previously studied with Enric Miralles at the School of Architecture in Barcelona (ETSAB). He subsequently worked for Rem Koolhaas’ Office for Metropolitan Architecture (OMA) in Rotterdam.  He is the author of essays, the editor of publications and the curator of exhibitions about architecture and urbanism. As the curator of the Danish contribution to the Architecture Biennale in Venice 2006, he introduced the concept of ‘co-evolution’ in architecture (in contrast to the ‘star architect’ concept) and conceived of the project CO-EVOLUTION: Danish/Chinese Collaboration on Sustainable Urban Development in China. The project was awarded the Golden Lion for Best National Pavilion.  In 2010 he gave the Le Corbusier Memorial Lecture in Chandigarh, in which he noted that “the problem with modernist architecture is not only that it tries to erase the past; it also obstructs the future!”  He is currently working on a book about the urban transformation of India.