On 10 Nov. 2010, World Streets ran an article under the title “The P2P carsharing saga continues: The WhipCar story” by the young

entrepreneurs introducing their  new WhipCar P2P carsharing start-up, which story you can find here – http://wp.me/psKUY-13b.  After more than two years of hard work in developing an entirely new, uncharted market for Britain, they have just decided, in their words that: “we have discovered there are still barriers to widespread adoption of peer-to-peer car rental in the UK. As a small team with limited resources, we have taken a good long look at these scaling challenges. And, after much thought, we have made the extremely difficult decision to close WhipCar.”

Let’s have a look at what they have to say in terms of lessons learned, and at the end of this short piece share with you a couple of thoughts on the meaning of this in the broader context of carsharing and P2P.

When we launched WhipCar in April 2010, we embarked on a very exciting mission. We were the first to offer car owners the chance to make better use of their cars and offset the rising costs of motoring by renting to their neighbours.

We are sad to say that, at this time, we have decided to close WhipCar.

In many ways, WhipCar has been a success. We were able to shift commonly held perceptions of car sharing and ownership with the help of so many integral WhipCar community members. We have been able to boast that drivers in urban areas such as central London could access convenient, cost-effective and friendly WhipCar rentals within five minutes of their doorstep.

However, while so many of you saw the future, we have discovered there are still barriers to widespread adoption of peer-to-peer car rental in the UK. As a small team with limited resources, we have taken a good long look at these scaling challenges. And, after much thought, we have made the extremely difficult decision to close WhipCar. We would like to thank our wonderful community members, our colleagues and our investors for their incredible support over the past three exciting years.

What this means for our customers:

If you are a WhipCar member, you may want to take a look at our FAQs for some useful information. If you have any further questions regarding our closure, an interest in our technology or opportunities for the future, feel free to get in touch by emailing us at hi@whipcar.com. Please understand that we are prioritising our existing members when responding to incoming email and that we will try to get back to you as soon as we can.

Thank you again for your support and for taking the leap with us into peer-to-peer car rental. We’re proud to have had a chance to push the boundaries of the sharing economy, and we can’t wait to see where it heads next.

All the best,
The WhipCar Team

* For full announcement and annexes: http://www.whipcar.com/ 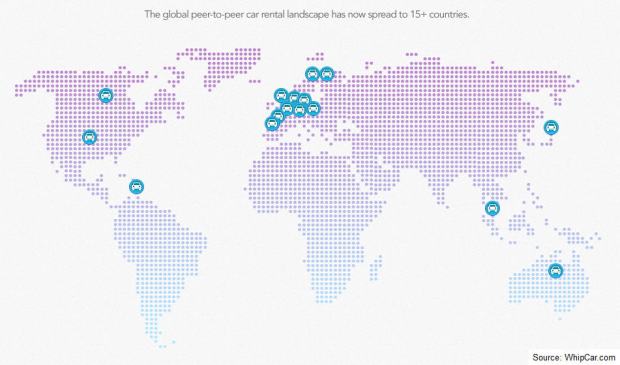 Tom Wright is co-founder of WhipCar. Previously he founded gurgle.com, a social network for pregnant women now owned by MotherCare, and bookarmy.com, a b

ook recommendation service now owned by Harper Collins. Tom has held a number of senior digital strategy and development roles during his career with companies such as BSkyB and Fleming Media.

Vinay Gupta is co-founder of WhipCar. Previously he has been a digital media strategist and consultant working with brands such as Fleming Media, MySpace, Emap, Vue and the Abu Dhabi Media Zone. Vinay holds an MBA from London Business School and has held senior travel management positions at AT&T and American Express.

Is this an isolated small business event? Or does it sound the death knell for P2P?  Or at least P2P in Britain?  From our perspective the answer is most definitely no to the last two propositions.  But it does give an idea of how just difficult it is to work up such a new and challenging business concept with thin resources.

The key phrase in this case is their comment: “As a small team with limited resources, we have taken a good long look at these scaling challenges.”  Thus it is not a problem with the P2P concept.  Nor with P2P in Britain. Nor is it a tool problem, as we can see from other projects that are moving ahead. some of which are indicated on the above map.

But in a new and still largely uncharted business area like this one needs deep pockets and with them the ability to learn, adjust, and in time to scale up when the time comes.

We will contact some of the other on-going P2P operations and invite them to share their observations with you on this.

7 thoughts on “WhipCar closes down P2P carsharing operation in Britain. What does it mean?”