“Better Choices” is the title that Professor S. K. Jason Chang, Director, Advanced Transport Research Center of National Taiwan University and I have chosen for our collaborative book in the works reporting on the challenges of “Bringing Sustainable Transport to Smaller Asian Cities”. The MS is presently in process and is being presented, critiqued, reviewed and discussed  by colleagues in both the Asia/Pacific region and other parts of the world in which the “smaller cities” challenges of sustainable transport transition have much in common with those facing planners, policy makers and others concerned with these planetary issues and dilemmas. The completed book is slated for publication by Think City– http://thinkcity.com.my —  in English, Chinese and Malay editions  in Spring 2017 (other languages currently under discussion).

The following introductory note is taken from the opening chapter of the working edition and is presented here by way of advance information for our international colleagues and others interested, and for your eventual comments, challenges, questions and suggestions. For a short note setting on the overall work plan click to https://drive.google.com/open?id=0B41h-Am2TpUHZldiUGdlbG8wQ2c.

The crux of the strategy which is explored in these pages is a deep belief that by and large human beings in any part of the world are essentially change resistant. And particularly so if the perceived changes are seen as leaving them worse off — and,worse yet, are imposed by unfeeling, out of touch government bureaucrats and politicians.

And yet obvious as that may be, one of the most striking things that we can note from transportation policies in most places in the past has been that (a) they all too often effectively offer no choices to much of the population. Or (b) choices which are in one or more ways perceived by the citizen as being inferior.

Inferior?  Waiting for a bus in the rain is one example.  Walking a kilometer to get to a public transit stop is another.  Public programs which make it hard to find a convenient parking place in the city, for no matter what announced benevolent reasons, are perceived by most of us who are car dependent as an inferior choice.  Increasing the price of petrol, which makes my daily commute even more costly. A government which on the one hand virtually recommends bicycle use, but which at the same time makes no real provision for safe and convenient cycling.   A ride to and from work twice a day which year after year takes more time, is increasingly dangerous and unhealthy, and cost more money.  And the long list of bad choices goes on.

But given the experience in leading edge cities over the last several decades, and the enormous advantages offered by new technologies and new ways of organizing ourselves, there is no good reason for public policy makers not to regroup, mobilize and create as the central thrust of transportation policy to provide better choices for all.  To do this, we are going to have to mobilize ourselves under a radically different guiding strategy.  Which is what this little book is all about.

Better Choices for whom?

Above all for people without cars, for space- and resource-efficient transportation.  This is more than 50% of the population (see “Equity, Efficiency and the Invisible Transportation Majority”

Dr. S.K. Jason Chang (台大土木系教授/先進公共運輸研究中心主任 張學孔）is Professor in the Department of Civil Engineering at the National Taiwan University, and Director of the Advanced Public Transport Research Center at NTU. The framework of APTC is divided into four groups, namely Urban Public Transportation, Mobility Management, Intelligent Technology Application, and Sustainable Transportation Policy.  Professor Chang  is a world famous expert in ITS and sustainable development, and has served as advisor for Taipei City Government for almost 20 years. He seerves as visiting professor in China Academy of Transport Sciences in Beijing and visiting professor in Shandong University. Jason has been actively involved in many international societies and activities, including Chair of Taipei Public Transport Association, Executive Director of Transportation Institute in Taiwan, Vice President of ITS Taiwan, BOD member of the World Congress on ITS, BOD Member of Eastern Asia Society for Transport Studies, and Member of America Society of Civil Engineers, Member of ITE. He has published more than 100 journal papers, 150 conference papers, and more than 100 technical reports.

Think City is a community-based urban regeneration body that seeks to create more sustainable and liveable cities. As a wholly owned subsidiary of Khazanah Nasional Berhad established in 2009, it spearheaded urban regeneration in the George Town UNESCO World Heritage Site. Consequently, it 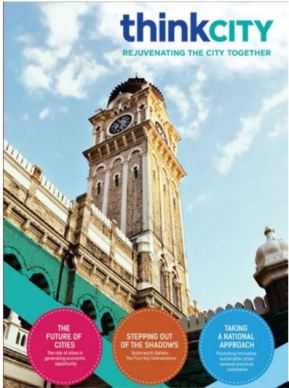 was given the mandate to expand its initiatives to Kuala Lumpur, Butterworth and Johore Bahru. To deliver long term holistic solutions, Think City works closely with governments, local and international agencies, and various communities, building effective partnerships and enhancing capacity along the way

Think City’s Urban Knowledge team was established in late 2016. Its purpose is to help Think City reach its aspiration to be a regional thought leader in urban regeneration by 2020. The team’s focus areas are a) capacity building through publications, how to manuals, seminars and training workshops; b) primary and commissioned research on South East Asian urban settlements; c) developing and testing new ideas in urban regeneration; and d) building regional networks and partnerships. The team will also act as the organisation’s knowledge bank by collating and storing digital and spatial data and institutional learnings. Current activities include research on the future of mobility, greening rooftops in KL, affordable housing models and small towns; baseline population and land use surveys; and territorial planning for the Malacca Straits Diagonal.