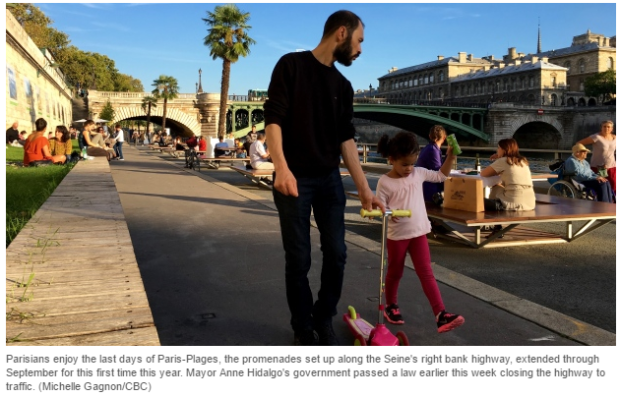 CBC reporter and producer Michelle Gagnon came to Paris to enquire about the Paris plan to retire parts of a city highway and turn it into a carless, truckless, busless urban walk, linger, bike and play way. Her article opens like this:

Chase scenes along the Seine river in Paris are classic. We’ve all seen them. Walled in on one side, a river on the other, perfectly perilous ground for Bond, Bourne and other lesser mortals.

“Delon and Belmondo starred in a few, too,” says Mourad Ladouari, bordering on wistful. Ladouari is a Paris taxi driver who likes to practise his English talking old French films with passengers. He’s congenial and even-tempered but not about the recent ruling closing the right bank highway to traffic.

Designed in the car age to provide a fast route through a city otherwise constrained by its ring road, the highway has cut through Paris’s downtown core since the 1960s.

But since 2002, segments of the road have been closed to traffic over the summer, when a beach-like promenade called Paris-Plages is erected.

Hidalgo called the greening measure ‘historic,’ but the opposition said it was an autocratic move that went against the recommendations of a public inquiry into the matter.

Before making way for the beach this summer, an estimated 43,000 cars drove the quay highway daily.

“It’s only one o’clock now,” Ladouari says of our relatively smooth drive. “Cars that would have been down there are up at street level now. Come 3, 4, 5 pm, traffic is going to start backing up at Concorde. It’ll spill onto St-Germain on the left and through the Louvre to the right. Eventually, the whole city centre will be choked up.”

The bill to ban cars from the right bank was bitterly contested but was passed earlier this week by the mayor’s majority government. Hidalgo heralded it as “historic.” Her opponents — and there are many — opted instead for “autocratic.”

Conservative opposition on city council decried the disregard for the findings of a public inquiry that concluded the closure should not go ahead.

Chiming in to cry foul were suburban mayors, taxi drivers, Uber drivers and thousands of commuters, either claiming privilege for downtown residents, prejudice against the poor, insufficient alternative transport or increased congestion.

Britton’s equanimity comes from years of thinking about sustainable development. An American economist who moved to France over 40 years ago, he takes a long view on the issue.

Britton tells stories sometimes to explain the vagaries of sustainable development. He’s been in this game since the 1970s, and, according to him, controversy over quayside traffic is an old story.

“In 1973-74, during the first energy crisis, it became very clear that unless we had a policy about cars, our cities, and Paris in particular, would die. So, Paris has been trying to figure out its transportation issues for 40 years.”

And, to his mind, they’ve done quite well.

“By international standards, Paris can fairly be considered today among the world leaders in sustainable transport.” 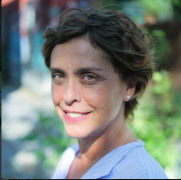 Michelle Gagnon is a producer for CBC News on assignment in Paris. She has covered domestic and international affairs, including the European economic crisis, the mass migration of refugees, and the Paris and Brussels attacks.  Her Tweet address is @michigagnon

For more about CBC News: http://www.cbc.radio-canada.ca/en/

About the editor of World Streets