What happens when half a thousand cyclists from more than a hundred cities from all corners of our gasping planet decide to sign into a common forum in which they can at their leisure read and share news, preoccupations and eventually useful hints with others who share their interests and concerns about safe and agreeable cycling in our day-to-day lives? Welcome to the World City Cycling Forum of World Streets freely available to all since 2007, open 24/7  at https://www.facebook.com/groups/worldcitybike/

And in all this today is a special day.  We are proud to announce that our informal city bike network has just added its 500th member. Welcome to Paul Zimmerman of near-by Hong Kong, a world city in which cyclists – long ignored by policy makers and planners – are working hard to fight their way back to making HK a cycle friendly city.  (We need more shining examples.)

Set up in April 2007 as a dedicated independent group platform for whoever might chose to show up and get involved, the World City Cycling Forum has grown slowly over these nearly nine years, now with five hundred members from all continents and countries rich and poor, several thousand postings and hundreds of striking photographs showing the triumphs and the challenges of cycling.  Bravo to us all!

The focus of this informal world citizen group is to encourage and support safe and abundant cycling in cities around the world.  It is a wide open, self-organized, crowdsourcing exercise in knowledge sharing and network building. And while we look with benevolence at matters relating to leisure cycling and racing, our focus is totally on transport cycling, i.e., how people pedal from A to B because they have to get somewhere in their daily lives. (See World Streets article on The Three Worlds of Cycling at http://wp.me/psKUY-4hZ, and do look at the critical comments)

The Facebook page offers several interesting look-ins that you may not have immediately noticed: 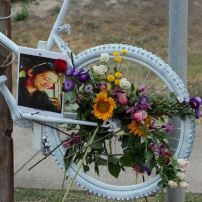 World Streets on City Cycling (since 2009)

Original introduction: Surprising though it may seem to some, the bicycle has a turnkey role in 21st century cities, large or small, North or South, rich or poor. Getting city cycling right is a matter of high priority when it comes both to local and planetary environmental impacts, solid economics, affordability, fossil fuel and resource savings, public health, equity, democracy and quality of life.

For all of those of our cities around the world who have over the last decades bought into the car plus speed plus distance lifestyle without giving it much thought, getting this transition right is a significant technical, social and political challenge.

Fortunately, there is a large and fast expanding base of experience and information, which should guarantee success for all those who are not too lazy or too much in a hurry to do their homework properly and lay a successful base for their project. In World Streets you can find well more than one hundred articles and sources which can help in the move to more and better cycling in your city. And several dozen on planning and operating Public Bicycle Systems.

So before you spend one penny of precious taxpayer money for the project you are thinking about, read on! It would be a pity not to take advantage of these valuable lessons of experience.

Invite 500 more people to join these discussions. Point them to https://www.facebook.com/groups/worldcitybike/ and let them figure it out for themselves.