Further to our recent posting on “Climate Change 101: Thinking about Illich, Energy and Equity” we have just received he following commentary from Chris Bradshaw (See author note below.) 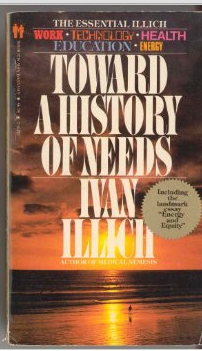 I used your post to re-read — after, I estimate, 25 years — this delightful essay. I own two copies, one which is part of “Towards a History of Needs” published four years later in 1977).

In that volume, there is an introductory note, which might be useful to add (see end, along with the forward for the 1974 publication — Perennial Library — of this essay by itself). Two things come from these two extras: a) this essay first appeared in Le Monde (yes, probably in French), and b) his defined audience included, equally, the under-developed world.

He, of course, missed global warming as an issue that would fit nicely next to “energy crisis.”

I would add that he missed the link between high-speed and high-power and the formalities of control — rules, regulations, resources — that also disenfranchise those with less speed and power.

Peter D. Norton’s recent book, “Fighting Traffic” does a yeoman effort to show how the transition from “transit” to “transport” in North American cities took place 1915-1935.

I will continue to muse over Illich’s brilliant thinking.

This text was first published in Le Monde in early 1973. Over lunch in Paris the venerable editor of that daily, as he accepted my manuscript, recommended just one change. He felt that a term as little known and as technical as “energy crisis” had no place in the opening sentence of an article that he would be running on page 1. As I now reread the text, I am struck by the speed with which language and issues have shifted in less than five years. But I am equally struck by the slow yet steady pace at which the radical alternative to industrial society — namely, low-energy, convivial modernity — has gained defenders.

In this essay I argue that under some circumstances, a technology incorporates the values of the society for which it was invented to such a degree that these values become dominant in every society which applies that technology. The material structure of production devices can thus irremediably incorporate class prejudice. High-energy technology, at least as applied to traffic, provides a clear example. Obviously, this thesis [131-132] underlines the legitimacy of those professionals who monopolize the operation of such technologies. It is particularly irksome to those individuals within the professions who seek to serve the public by using the rhetoric of class struggle with the aim of replacing the “capitalists” who now control institutional policy by professional peers and laymen who accept professional standards. Mainly under the influence of such “radical” professionals, this thesis has, in only five years, changed from an oddity into a heresy that has provoked a barrage of abuse.

The distinction proposed here, however, is not new. I oppose tools that can be applied in the generation of use-values to others than cannot be used except in the production of commodities. This distinction has recently been re-emphasized by a great variety of social critics. The insistence on the need for a balance between convivial and industrial tools is, in fact, the common distinctive element in an emerging consensus among groups engaged in radical politics. A superb guide to the bibliography in this field has been published in Radical Technology (London and New York, 1976), by the editors of Undercurrents.

I have transferred my own files on the theme to Valentina Borremans, who is now working on a librarians’ guide to reference materials on use-value-oriented modern tools, scheduled for publication in 1978. (Preliminary drafts of individual chapters of this guide can be obtained by writing to Valentina Borremans, APDO 479, Cuernavaca, Maxico). The specific argument on socially critical energy thresholds in transportation that I pursue in this essay has been elaborated and documented by two collegues, Jean-Pierre Dupuy and Jean Robert, in their two jointly written books, La Trahison de l’opulence (Paris, 1976) and Les Chronophages (Paris, 1978).

This essay is my summary of the discussions which took place in the course of two sessions — one in English, the other in Spanish — of a seminar that met at the Center for Intercultural Documentation (CIDOC) in Cuernavaca, Mexico. I am grateful to my colleagues who contributed ideas, facts, and criticism. Copes of the working papers of our on-going seminar on the history of thermodynamics as applied to transportation can be obtained from Isaac Rogel, CIDOC Librarian, Apdo. 479, Cueravaca, Mexico. I owe special thanks to Dennis Suloivan for his editorial assistance on this essay.

The seminar on traffic was one of the preparatory meetings for a consultation which Valentina Borremans is now organizing at CIDOC for 1975-1976. The consultation will focus on the interlocking structure by which medical, legal, educational, and energy-intensive agencies (such as those which produce transportation and housing) impose their paralyzing monopoly on contemporary society. Although the context of our discussion is Latin America, its theme is pertinent to other regions.

During the next thirty months, the consultation ought to generate several more short working papers which are of general interest even though they are only vulnerable ideas in progress and in search of critique. Such essays cannot await the permanence of the book. They do not belong in the learned journal. They resist packaging in periodicals. The monopoly of publishers over the printed word too often pushes the tract into the mimeograph’s limbo or seduces the author to reshape his text to fit the available vehicles. To break this monopoly, Marion Boyars has shaped the format of this series, and Dennis Sullivan has offered to edit and submit to her what our consultation might produce.

Chris Bradshaw retired from city & regional planning in 1996, and co-founded Ottawa’s carsharing company, Vrtucar in 2000. He has been an advocate for walking and pedestrian rights for 30 years. In retirement, he is championing a society-wide transition to a second-generation version of carsharing (integrating car-sharing, taxis, ridesharing, car-rental, and delivery). He lives ‘car-lite’ in downtown Ottawa with his wife of 40 years.