This posting is part of a stimulating dialogue in which two contrasting views of the role and practice of city cycling are discussed. Because the issues examined here are in many ways universal and fundamental to the success of a city cycling program, including the on-going early Spring of a much needed cycling Renaissance in Penang, we are pleased to be able to share this first article with our readers. (PS. We need more creative disagreement between informed people such as this. If everyone agrees too quickly mediocrity invariably results. Sustainability is hard and challenging work.) 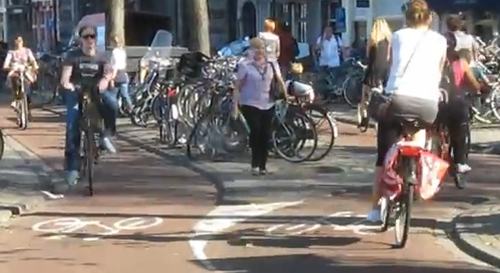 Review of John Forester’s ‘Two systems for Bicycle Operation: Obeying the Rules of the Road or Cyclist-Inferiority’ .

To see the other side, Mr. Forester’s paper cited here, Two Systems for Bicycle Operation is available at  http://www.icsc2013.com/papers/Forester2013_Two%20Operating%20Systems.pdf

It  is not difficult to agree with a number of observations and conclusions of John Forester. Just to mention a few:

>       Yes, a bicycle is a vehicle. And that has a bearing on the requirements for infrastructure to be used by cyclists. A cyclists is not a pedestrian and thus doesn’t belong on the sidewalk.

>       There is some truth in the observation that cycle tracks and cycle lanes sometimes are implemented to free the road of what motorists consider as ‘annoying elements’ on the road, that is cyclists. It is obvious that if this is the case, those cycling facilities will not be designed  in the best possible way.

>       There is a culture of fear beyond  reason that is counterproductive. This culture of fear is often reinforced by good intentions of road safety officers but does more harm than good as it stops people from cycling.

>       And yes: cycle tracks are, from a safety point of view, not effective if intersections and crossings are not properly designed as well.

The question is: what do we conclude from these observations? To me it seems that John is much more clear about what he doesn’t want than about what he wants.

As John is referring to the developments and debates around cycling infrastructure in the 1960s and 1970s, I too will refer to that time. Those days were the start of what I call ‘modern cycling policies’ in the Netherlands.

Between 1950 and 1975 we have seen a sharp decline of cycling in the Netherlands. At first this was perceived as the inevitable effects of progress. Traffic engineers considered cycling as something that eventually would disappear and both policies and infrastructural design reflected that view.

But in the 1970s also the drawback of that development manifested itself: increasing road safety problems, erosion of the liveability of cities and the quality of public space, loss of the freedom of movement of those that don’t have access to cars, just to mention a few. And more and more people became aware of the importance of cycling as a mode of transport worth to be fostered.

In 1976 the government decided to fund two experimental schemes in Tilburg and The Hague: the implementation of so called ‘demonstration cycle routes’. These routes mainly consisted out of segregated cycling facilities, some stretches were ‘car restrained’, and much attention was given to the design of intersections to combine ‘right of way’ for cyclists with safety. The two projects were extensively evaluated on various aspects: their impact on bicycle use, appreciation by the users, road safety effects, impact on the local economy and the like. To be honest: the impacts on road safety were rather limited.

The most striking outcome, though, was that cyclists very much liked the fact that they could cycle ‘undisturbed’. Their perception of safety improved considerably. And the experimental routes attracted many cyclists from parallel routes.

If our society, our cities, have the ambition to take advantage of all the benefits that (increased) bicycle use can yield, then the challenge is to make cycling attractive. Road safety is not the ultimate goal of cycling policies nor the only criterion for the success of interventions.

Road safety and road safety perceptions are an important pre-condition for cycling promotion. Nothing more, and certainly nothing less! A culture of fear, permanently stressing and exaggerating the dangers of the road for cyclists won’t help. But people won’t cycle just because it is safe either! (As we don’t chose a restaurant for their food safety, but rather for the good taste of the meal!) Cycling has to be a practical, efficient, convenient and enjoyable mode of transport.

Let’s face it: a road system, cities, designed primarily for cars don’t offer an attractive environment for cycling. Bicycles are vehicles, but the differences with motor vehicles are substantial. And car environments can be pretty intimidating to cyclists. Indian cities (still having a substantial share of cycling) show how problematic the co-existence of motor traffic and cycling is when road design doesn’t take into consideration the specific needs of cyclists.

The mere recommendation to follow or ‘obey’ the rules of the road is simply not sufficient. Even if we believe that cyclists training potentially could turn people into confident cyclists that are capable to deal with a car dominated road environment, this road environment will still be experienced as being hostile!

Let me quote Steven Fleming in his book ‘Cycle space’:

“As a manly pursuit, effective or ‘vehicular’ cycling – just like John Forester taught me to do with his book – was once, for me, a great source of pride. I asserted my right to the road. I dazzled kid in the back seats of their parents’ cars. They would wave at the cyclist keeping pace with the traffic. Then I grew up…. Sure, when I have no better option, I will risk my life among trucks and cars, but given the choice I would rather ride on a bike path flanking a river. It was the requirement to commute on rainy nights that taught me to seek alternative routes. I found at night I was safer on quiet back streets. (…)”

In all it is not that strange that many planners an cyclists alike have concluded that high volumes of (speeding) motor traffic and cycling are incompatible. The fact that this conclusion in the past has resulted into banning cyclists from the road rather than to provide them better conditions is no reason to deny this incompatibility. The question is: how do we solve the problem. I refuse to accept that it is either ‘obeying the rules of the road’ or ‘cyclists-inferiority’. That is a false dichotomy.

Basically there are two ways to solve the incompatibility challenge:

Both approaches don’t exclude each other, rather they are complementary strategies:

John Forester definitely has a point that segregation in itself is not enough to accommodate an efficient use of the bicycle as a fully fledged mode of transport. Even more so if only road sections get their segregated facilities and intersections remain untouched. It is not difficult to find many examples of badly designed dedicated cycling infrastructure that seems to have no other function than to provide an alibi to road authorities to clear the way for ever increasing volumes of motor traffic. That is why in the Netherlands we have formulated additional quality requirements to cycling infrastructure in general, that is the requirements that allow cyclists to effectively use the road network for any trip purpose. We call them the five main requirements:

>       Coherence: cycling infrastructure should provide good connectivity between all origins and destinations in the area;

>       Directness: road authorities should minimise detours and delays for cyclists;

>       Comfort: cycling infrastructure should allow for comfortable manoeuvring and minimise the use of (precious) human energy;

>       Attractiveness: as slower modes of movement are more sensitive for the quality of urban space, cycle routes should preferably use varied small scale environments.

We are convinced that this wider approach (beyond safety-only considerations) is fully recognising the ‘vehicular’ character of cycling. In this approach we don’t look down on those who don’t dare to cycle in the midst of heavy motor traffic nor on the parents that won’t allow their children the valuable freedom of movement because of their perception of insufficient road safety. We prefer to counter the culture of fear around cycling by the creation of a road environment that doesn’t require permanent warnings against the dangers of the road, simply because we have effectively dealt with those dangers. We think that this is better than teaching and learning how to deal with them. Cycling is too important as a mode of transport to leave it only to the daring helmeted cycle warriors in conspicuous jackets. Cycling should not be elitist, but for all.

Tom Godefrooij (1950) is a sustainable urban transport specialist. In 1981 he joined the Dutch Cyclists’ Union to make a publication on traffic calming.

Subsequently he became policy director of the Dutch Cyclists’ Union. From 1996 to 1999 he was president of the European Cyclists’ Federation (ECF), and in 2000 he was programme director for the international cycling conference Velo Mondial 2000 in Amsterdam. In 2001 he took up office with the Dutch Province of Noord-Brabant being responsible for the drafting of the  Provincial Traffic and Transport Plan. From 2006 – 2012 he was employed by Interface of Cycling Expertise (I‑CE), and was involved in capacity building activities in the field of cycling-inclusive policy development worldwide..Since 2011he is senior policy advisor at the then created Dutch Cycling Embassy aiming to share Dutch cycling-related expertise worldwide.