This contribution by Susan Shaheen and Adam Cohen in which they pick out and analyze  some of the main trends and eventual future prospects of the carshare “industry” in North America is the second country report in this World Streets 2013/14 series updating our readers on the latest developments internationally in this fast-moving, fast-developing field of new ways of owning and using cars. To access all the reports in this series thus far, you are invited to click to  https://worldstreets.wordpress.com/category/carshare/

As carsharing matures, a key question remains: how will it scale into less dense areas? What role will new entrants and business models play in its expansion? How will it be branded to be successful and for which market segments? What social and environmental impacts can be expected as it expands and by approach over time? What role should public policy play in supporting its expansion? What innovative insurance models could be developed to support shared use? What type of service integration would best support shared vehicles and the sharing economy overall? All of these questions are outstanding, but answers are beginning to unfold as this evolution continues.

In North America, two automaker programs (car2go and DriveNow) represented 11.7% and 18.4% of the carsharing membership and fleets deployed, respectively, in January 2013. In December 2012, Daimler’s car2go carsharing program expanded operations into Seattle. One-way (or point-to-point) carsharing allows members to pick-up a vehicle at one location and drop it off at another. As of June 2013, car2go and DriveNow collectively operated one-way carsharing services in eight American markets in the U.S. (Austin, Denver, Miami, Portland, San Diego, San Francisco, Seattle, and Washington, D.C.). As of June 2013, car2go operated in three metropolitan markets in Canada (Calgary, Toronto, and Vancouver). In May 2013, Communauto announced plans to launch an electric one-way carsharing pilot between June and October 2013 in the Plateau-Mont-Royal borough of Montreal.  In June 2013, Indianapolis, IN announced that it plans to launch an EV one-way carsharing service of 500 vehicles in partnership with the Bolloré Group (the founders of Autolib in Paris) in Spring 2014.

In North America, rental car programs represented 79.0% and 63.1% of the carsharing membership and fleets deployed, respectively, in January 2013. This represents an increase from 15.8% of membership and 11.8% of fleets in January 2012, largely due to the Avis Budget Group acquisition of Zipcar, which was announced on January 2, 2013. Note this does not reflect the May 2013 acquisition of IGO CarSharing by Enterprise Holdings.

Member–vehicle ratios are an important metric, which can be used to assess how many customers are being served per vehicle and the relative usage level of carsharing members. As of January 2013, U.S. member-vehicle ratios were 73:1, representing a 0.4% increase

*Data depicted July of each year, except for January 2013. Our numbers do not include p2p. The operators will not provide these data. 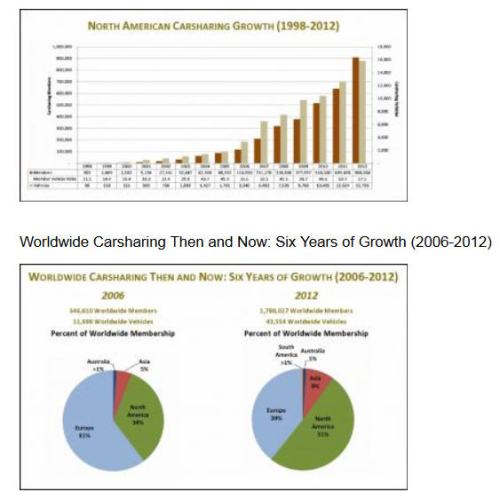 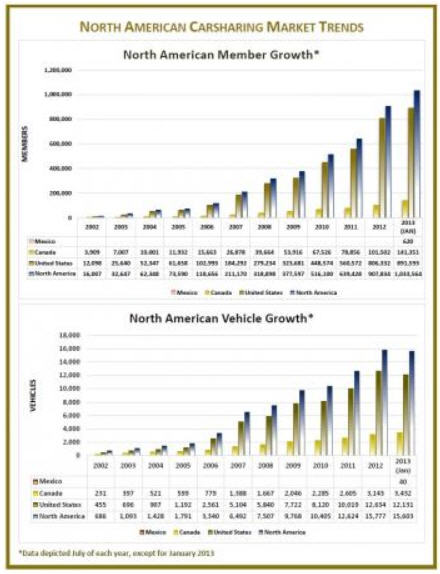 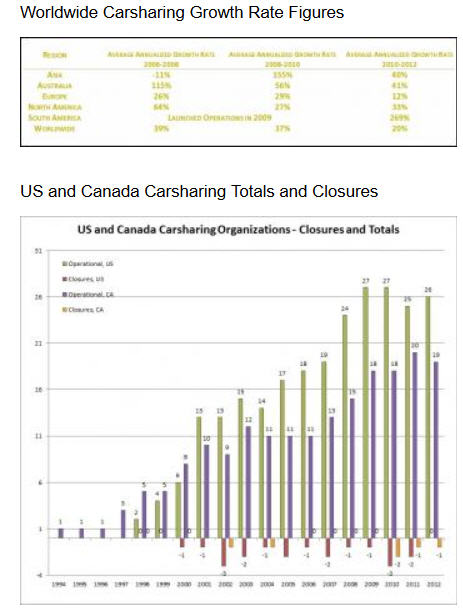 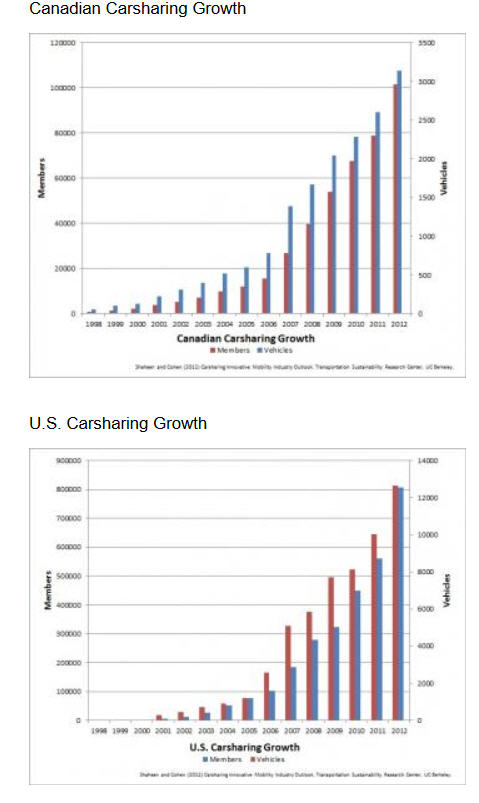 In April 2013, Communauto, operating throughout the Province of Québec, launched a voluntary program to enable its members to voluntarily purchase carbon credits in partnership with Planetair and CO2 Environnement. Based on per-kilometer use, Communauto offers three different offset rates depending on the vehicle driven (electric, hybrid, or gas). The carbon offsets will be used for reforestation projects in Québec and to support international renewable energy and energy efficiency projects.

In 2008, City CarShare of the San Francisco Bay Area introduced the nation’s first wheelchair accessible carsharing vehicle in partnership with the City of Berkeley’s Commission on Disability. In January 2013, City CarShare expanded this program with two additional wheelchair accessible minivans. Each minivan holds two people using mobility devices, plus a driver and three additional passengers depending on the size of the wheelchair(s) [Pictured lower left].

In November 2011, IGO CarSharing in Chicago, IL launched a $2.5 million electric vehicle (EV) project to expand its fleet with an additional 36 EVs and the installation of 18 solar-powered charging stations. The solar canopies represent an industry milestone to provide clean energy to charge their solar fleet. Through a public-private partnership, IGO’s solar canopies also offers a limited number of charging stations available for public use. Construction of the canopies is ongoing [Pictured lower right].

Announced in January 2013, Avis Budget Group officially completed the $500 million acquisition on March 14, 2013. Avis, as a brand, had an early history in short-term hourly rentals. Avis-Europe became the first large-scale rental car company to launch carsharing servicesnotably CARvenience, which started operations in the United Kingdom in 2001. Despite its early entry into carsharing, these efforts were small scale and by the end of the decade were eclipsed by the larger entries of Enterprise, Hertz, Sixt, and U-Haul until its acquisition of Zipcar.

Based on data from Auto Rental News, the table to the right represents the top four car rental companies compared to Zipcarboth in fleet size and revenue. In terms of fleet scale, Zipcar represents 0.5% of the top four rental car fleets and less than 3% of the Avis Budget Group’s fleet size in 2012. Note, Auto Rental News did not publish disaggregated data for other carsharing operators in 2012.

Studies on “classic” carsharing have emphasized the benefits attributed to neighborhood-based carsharing. This model has documented that each carsharing vehicle reduces the need for 9 to 13 private automobiles in North America through both vehicle sales and foregone purchases due to carsharing. A survey of members of all major North American carsharing organizations in Fall 2008 (6,281 respondents) found an average vehicle miles/kilometers decline per year of 27% (observed impact, based on vehicles sold) and 56% (full impact, based on vehicles sold and postponed purchases combined) in the before-and-after mean driving distance. This equates to an aggregate reduction of 1.1 billion miles driven for members of classic neighborhood carsharing (as of January 1st, 2013). However, this is still relatively small compared to the Federal Highway Administration estimate of 2.9 trillion miles driven in the U.S. in 2012.

Finally, approximately 25% of respondents sold a vehicle, and roughly another 25% of the total sample would have considered obtaining a vehicle, if carsharing disappeared. These two subgroups were mutually exclusive; those that shed a vehicle were not counted among those who would consider acquiring a vehicle. In total, the survey suggested that about 50% of members had either shed or forgone the acquisition of a vehicle as part of their carsharing membership (1-3).

Since carsharing launched in North America in 1994 (Montreal, Canada), it has continued to grow and evolve. Today, there are many new players (including automakers); more advanced technologies for managing operations, reservations, and billing; and new business models. Innovative models include one-way carsharing or point-to-point services (such as Daimler’s car2go, BMW’s DriveNow, and Communauto’s electric one-way carsharing pilot program) and peer- to-peer carsharing (e.g., Getaround and RelayRides). Peer-to-peer or personal vehicle sharing occurs when privately-owned vehicles are made temporarily available for shared use. Other models will soon be on the horizon, such as fractional ownership (i.e., individuals sub-lease or subscribe to a vehicle owned by a third party).

A key question is how carsharing will impact car rental and how car rental will impact carsharing. We believe that the answer is both and that some of the implications and trends might include the following in the shorter and longer term. It is likely the car rental industry will continue to enhance customer convenience through increased automation, unattended services, and virtual storefronts.

Some Final Thoughts and Questions

As carsharing matures, a key question remains: how will it scale into less dense areas? What role will new entrants and business models play in its expansion? How will it be branded to be successful and for which market segments? What social and environmental impacts can be expected as it expands and by approach over time? What role should public policy play in supporting its expansion? What innovative insurance models could be developed to support shared use? What type of service integration would best support shared vehicles and the sharing economy overall? All of these questions are outstanding, but answers are beginning to unfold as this evolution continues.

Susan Shaheen is Co-Director of the Transportation Sustainability Research Center (TSRC). She has a Ph.D. in ecology, focusing on technology management and the environmental aspects of transportation, from the University of California, Davis  and a MS in public policy analysis from the University of Rochester.She was the chair of the Emerging and Innovative Public Transport and Technologies (AP020) Committee of the Transportation Research Board (2004 to 2011) and served as the founding chair of the Carsharing/Station Car TRB Subcommittee from 1999 to 2004. Since 2004, Shaheen has been a research associate with the Mineta Transportation Institute at San Jose State University.

researcher in Fall 2004. His early TSRC research projects included the technical and legal feasibility of automated speed enforcement (ASE). As an undergraduate, Adam studied legal studies and urban studies at UC Berkeley and is interested in pursuing a career in transportation engineering. Graduate courses in Civil Engineering, Transportation Engineering and City and Regional Planning augment his ongoing research. Currently, Adam has focused his research on North American and world carsharing. Adam received both the 2004 & 2005 Bay Area ITE Scholarship Essay Award, and was the 2005 District 6 Institute of Transportation Engineers (ITE) Fellow.

The Transportation Sustainability Research Center (TSRC) was formed in 2006. TSRC is managed by the Institute of Transportation Studies of the University of California, Berkeley; it is headquartered at the university’s Richmond Field Station. TSRC uses a wide range of analysis and evaluation tools, including questionnaires, interviews, focus groups, automated data collection systems, and simulation models to collect data and perform analysis and interpretation of the data. The center develops impartial findings and recommendations for key issues of interest to industry and policy makers to aid in decision making. TSRC has assisted in developing and implementing major California and federal regulations and initiatives regarding sustainable transportation, including zero emission vehicle credits for carsharing vehicles as part of the Zero Emission Vehicle (ZEV) Mandate in California.