Did someone say, White Chairs? 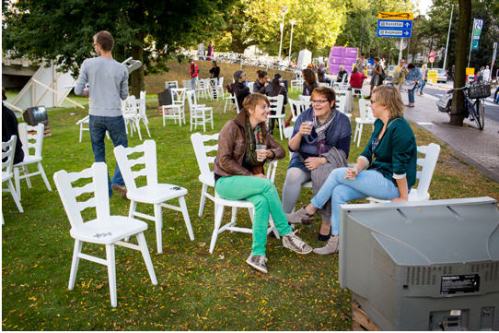 During Rotterdam’s public art festival Wereld van Witte de With, urbanism office M.E.S.T. reanimated this idea. But instead of bikes, the designers left 350 white chairs in public space in Rotterdam. The chairs served as a terrace for all the decentralized performances, and fed a discussion about public space and ownership at the same time. People were allowed to use the white chairs freely and to take them to any other location as long as they remained part of public space. The white chairs were slowly spread across the city. According to the festival organization, they were even spotted at the Central Station of Leiden, a town somewhere between Rotterdam and Amsterdam.

What do a bunch of White Chairs spread out willy-nilly in various public spaces in some Dutch city have to do with the pressing concerns of World Streets? If you got this far I am sure you will figure it out for yourself.

For the full text of this article click: http://popupcity.net/2012/09/350-white-chairs-pop-up-in-rotterdam/#ixzz2HZfZmOpr

One thought on “Did someone say, White Chairs?”