NEW REPORT: Public bikesharing—the shared use of a bicycle fleet—is an 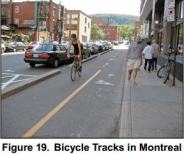 innovative transportation strategy that has recently emerged in major North American cities. Information technology (IT)-based bikesharing systems typically position bicycles throughout an urban environment, among a network of docking stations, for immediate access. Trips can be one-way, round-trip, or both, depending on the operator. Bikesharing can serve as both a first-and-last mile (connector to other modes) and a many-mile solution.

This just published 138 page report by Dr.Susan Shaheen and a team from the Institute of Transportation Studies at the University of California, Berkeley opens with a good three page Executive Summary and is available for free download at http://transweb.sjsu.edu/project/1029.html

This study evaluates public bikesharing in North America, reviewing the advances in technology and major events during its rapid expansion. We conducted 14 interviews with industry experts, public officials, and governmental agencies in the United States and Canada during summer 2011/spring 2012 and interviewed all 19 IT-based bikesharing organizations in the United States and Canada in spring 2012. Several bikesharing insurance experts were also consulted in spring 2012.

Notable developments during this period include the emergence of a close partnership between vendor and operator and technological advances, such as mobile bike-docking stations that can be moved to different locations and real-time bike/station tracking to facilitate system rebalancing and provide user information.

During fall 2011 and early 2012, we also completed a user survey (n=10,661) to obtain information on four early IT-based systems: BIXI in Montreal; BIXI in Toronto; Capital Bikeshare in Washington, D.C.; and Nice Ride Minnesota in the Twin Cities (Minneapolis and Saint Paul).

The survey found that the most common trip purpose for bikesharing is commuting to either work or school. Not surprisingly, respondents in all cities indicated that they increased bicycling as a result of bikesharing. Respondents in the denser cities generally stated that they walked and rode bus and rail less, while in the Twin Cities, respondents reported that they walked and rode rail more but rode the bus slightly less. These shifts may be a function of city size and density, as open-access bicycles can more quickly and easily serve riders on congested transportation networks.

Respondents in all cities overwhelmingly indicated that they drive less as a result of bikesharing, indicating that it reduces vehicle miles/kilometers traveled and vehicle emissions.

About the lead author:

One thought on “Public Bikesharing in North America”