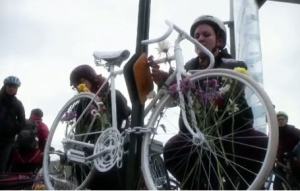 On Sunday, the NYC Street Memorial Project held the 6th Annual Memorial Ride and Walk. According to the New York City Department of Transportation, 151 pedestrians and 18 bicyclists were killed on the streets of New York City in 2010. Participants called for stronger measures to reduce traffic fatalities. The ride culminated by installing a “Ghost Bike” in front of Brooklyn Borough Hall for the unnamed pedestrians and cyclists killed in 2010.

We think it is fair to say that if we want a fair deal for safe streets in our cities those of us who care have to learn to organise for it and through our collective actions find ways to bring a majority of people to share these views.  Look at how these young people are taking hold of this responsibility in New York City, in this short film by videographer Elizabeth Press of Streetfilms. 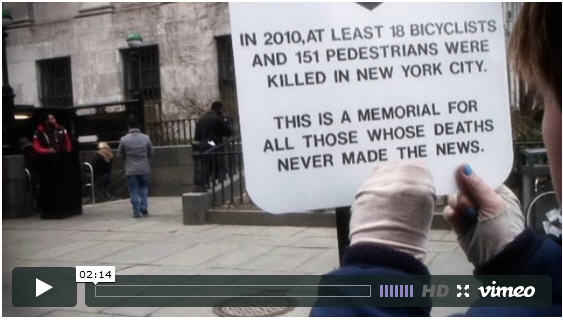 Ghost Bikes are small and somber memorials for bicyclists who are killed or hit on the street. A bicycle is painted all white and locked to a street sign near the crash site, accompanied by a small plaque. They serve as reminders of the tragedy that took place on an otherwise anonymous street corner, and as quiet statements in support of cyclists’ right to safe travel.

The first ghost bikes were created in St. Louis, Missouri in 2003, and they have since appeared in over 150 locations throughout the world. For those who create and install the memorials, the death of a fellow bicyclist hits home. We all travel the same unsafe streets and face the same risks; it could just as easily be any one of us. Each time we say we hope to never have to do it again — but we remain committed to making these memorials as long as they are needed.

Ghostbikes.org is intended to be a site for the worldwide cycling community. For information on ghost bike work being done in your area, click one of the locations listed on the right, or check out the full list.

This site was initially set up by the NYC Street Memorial Project. We work hard to collect information on many other locations, but for the most part only have access to media reports. This site reflects NYC’s project very well, but much of our information on other places is incomplete. We want to encourage people everywhere to help fill in the blanks on this site and help it grow.

We hope to create a space where those lost on dangerous streets can be remembered by their loved ones, members of their local communities, and others from around the world. We also hope to inspire more people to start installing ghost bikes in their communities and to initiate changes that will make us all safer on the streets.