This piece reports on a wave of unanticipated “free enterprise” mobility

solutions that have cropped up in the city of Bogotá in the last years. One bottom line is that these pedicabs represent a challenge for government on several scores. But at the same time they are providing affordable transportation  for people (voters) who need to make those trips. Now that you know this, what follows is a rough and ready machine translation of an article that appeared in the local paper, El Tiempo, yesterday. If you are interested in the topic you can learn a lot from these lines. And if you wish it in beautiful language, well strap on your best Spanish and click here.  Seguir pedaleando.

Five thousand bicycle taxis take to the streets of Bogotá

Operating illegally in some 70 areas, they have their own ‘pico y placa’ and created 30 organizations.

In the past six years, the streets of Bogotá have seen each day, between two and three pedicabs engaged in transporting passengers without legal authorization. This means that each year, more than 800 human-powered vehicles, a tricycle with a car for two people, which operate on the principle of the bicycle. 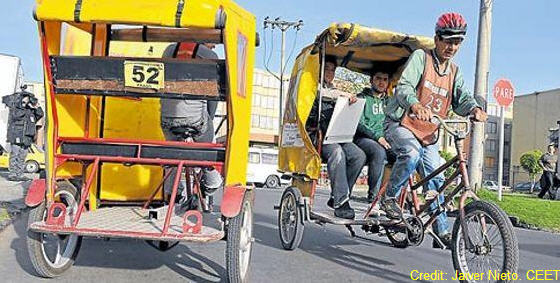 The Ministry of Transportation has no official census, but does not contradict the figure. Even in March 2009, in a report submitted to the Council, the entity was aware of 73 points which were operating pedicabs in eleven locations. Of 171 illegal transportation points, 73 were covered by these tricycles.

The official map showing Kennedy, Bosa and Suba and the three localities where the business had flourished (see map). “When we started to investigate and review, we assume that there were over 3,000, but in different operational they identify as 5,000 carnetizados” said Undersecretary of Mobility Services Angela Arenas, who admits that the phenomenon “overflowed” and qualifies as “proliferation concern.”

The explosion of business is to fund the law of supply and demand: bicitaxistas tested carry passengers in places where TransMilenio and transport companies did not provide the service, users simply jumped. “I had to walk like 20 blocks and is very far. Not stand walk,” said Luz Marina Gama user for two years.

Such as they are declared illegal, informal, and no one can regulate your business, bicitaxistas organized their own routes. Since then, they have reproduced like rabbits. “In 2007 we told the Ministry of Transportation that would have avalanche, said and done, now realized that he grew up,” said Jaime Gonzalez, president of the Ecological Federation Tricimóviles of Colombia (Fecotricol), which bring together some 32 associations and corporations that have arisen in the past two years, many of which are registered in the Chamber of Commerce. Today, there is a rickshaw for every three buses (city buses circulating 16 000) and a rickshaw taxis per 9 (in Bogotá are 50 000 licensed taxis).

The proliferation of pedicabs is not free. Making a rickshaw takes five or six days and costs between 1.5 and 2.7 million pesos, depending on the finishes and quality of materials. And you can pay by installments.

On the street, a bicitaxista can produce daily, between 30 thousand and 80 thousand dollars, depending on the area and route, which may represent between 900 thousand and two and a half million pesos per month.

The fare is between 700 pesos for a distance of one to two kilometers, on average. For the more adventurous, have also set up his own ‘fleet’ of pedicabs and are between three and five. Work one and the other charges 10 pesos per shift of eight hours.

In business you can find women-headed households, unemployed young people, welders, security guards and even a nurse and a bakery owner who sold his business to devote himself to bicitaxismo.

The influx overwhelmed pedicab routes were operating. Many have left the neighborhoods and low-traffic roads where the transport did not interfere with legal and frequently crosses paths with the buses in high-traffic routes such as the Avenue City of Cali.

That has increased police controls and, in response, have blocked bicitaxistas TransMilenio. “The sanction with subpoenas of 68,700 pesos and immobilization of 5, 20 and 40 days for transporting passengers without authorization,” says Arenas.

This year, through September, the police had 350 in 32 operational assets. “But it’s like to play cat and mouse, because of strides in a way and appear in another,” says Arenas by warning that there are only 1,300 police, in three shifts to handle all the traffic.

“To this we must put stop, because at any given time can be harmful to us too much of this growth,” said Saul Rodriguez, Asotransartisuba.

Therefore, the bicitaxistas were organized: they put a helmet and vest, were assigned car number and his clothing and now self-imposed a kind of peak and plate, to take turns and rotate routes: even and odd days ago by afternoon, and vice versa.

Now have more than 30 associations. “They are partnering because we want to become a lobbyist with the argument that labor is an option for them,” said Arenas. “Our goal is the approval of the service,” complains Jaime Gonzalez, president of Fecotricol.

The question is what role to assume the state. Are allowed to grow unchecked, as happened with the motorbike taxis in cities across the country? For now, ruled that the District will be part of the Integrated and intensified police repression. What is clear is that Bogotá was filled pedicab. “We would be collected, but tomorrow another makes one and takes it to work, because people know that this is a good business,” says Saul Rodriguez.

Now that you have read (and interpreted the article) let us ask you this. Do you feel that you have been enriched by this experience. Were the language irregularities a barrier to your understanding? To the extent that you lost interest and have no desire to repeat this experience ever? If you have any thoughts on this, please share your comments with us all here. Thanks and seguir pedaleando.

3 thoughts on “Rough trade on the streets of Bogota”