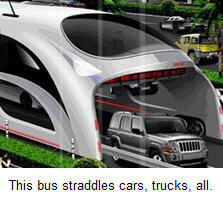 The happy life is one where every day something happens that makes us smile. Today we were blessed with this article that appeared in China Hush under the title  “Straddling” bus–a cheaper, greener and faster alternative to commute. Your editor was fascinated and hopes that you will be too.

Thank you Shenzhen Hashi Future Parking Equipment Co., Ltd. for your brilliantly stupid idea. We have entered it as a candidate for our world famous World Streets Worst Practices award for 2010.  Wish them luck!

The following text taken  from the orignal announcement by the promoters, can be  found  in full splendid bloom at http://www.chinahush.com/2010/07/31/straddling-bus-a-cheaper-greener-and-faster-alternative-to-commute/, with illustrative graphics and a six-minute video presentation.

A big concern on top of urban transportation planner’s mind is how to speed up the traffic: putting more buses on the road will jam the roads even worse and deteriorate the air; building more subway is costly and time-consuming. Well, here is a cheaper, greener and fast alternative to lighten their mind up a bit: the straddling bus, first exhibited on the 13th Beijing International High-tech Expo in May this year. In the near future, the model is to be put into pilot use in Beijing’s Mentougou District (bjnews). (The official site of the high-tech expo put it as 3D fast bus, which I think is more confusing, for now I’ll just call it the straddling bus.)

Proposed by Shenzhen Hashi Future Parking Equipment Co., Ltd, the model looks like a subway or light-rail train bestriding the road. It is 4-4.5 m high with two levels: passengers board on the upper level while other vehicles lower than 2 m can go through under. Powered by electricity and solar energy, the bus can speed up to 60 km/h carrying 1200-1400 passengers at a time without blocking other vehicles’ way. Also it costs about 500 million yuan to build the bus and a 40-km-long path for it, only 10% of building equivalent subway. It is said that the bus can reduce traffic jams by 20-30%.

What you can see from the video is traffic jams, what you can hear is noise, and there is also invisible air pollution. At present, there are mainly 4 types of public transits in China: subway, light-rail train, BRT, and normal bus. They have advantages and disadvantages, for example, subway costs a lot and takes long time to build; BRT takes up road spaces and produces noises as well as pollution to the air. How to develop environmental-friendly public transportation? Straddling bus provides a solution. Let’s watch a demonstration.

The straddling bus combines the advantages of BRT, it is also a substitution for BRT and subway in the future. As you all know, the majority vehicle on the road is car, the shortest vehicle is also car. Normally our overpass is 4.5-5.5 m high. The highlight innovation of straddling bus is that it runs above car and under overpass. Its biggest strength is saving road spaces, efficient and high in capacity. It can reduce up to 25-30% traffic jams on main routes. Running at an average 40 km/h, it can take 1200 people at a time, which means 300 passengers per cart.

Another strength of straddling bus is its short construction life cycle: only 1 year to build 40 km. Whereas building 40-km subway will take 3 years at best. Also the straddling bus will not need the large parking lot that normal buses demand. It can park at its own stop without affecting the passage of cars. This is what the interior looks like: it has huge skylight that will eliminate passengers’ sense of depression when enter.

There are two parts in building the straddling bus. One is remodeling the road, the other is building station platforms. Two ways to remodel the road: we can go with laying rails on both sides of car lane, which save 30% energy; or we can paint two white lines on both sides and use auto-pilot technology in the bus, which will follow the lines and run stable.

There are also two ways in dealing with station platform. One is to load/unload through the sides; the other is using the built-in ladder so that passengers can go up and to the overpass through the ceiling door.

Straddling bus is completely powered by municipal electricity and solar energy system. In terms of electricity, the setting is called relay direct current electrification. The bus itself is electrical conductor, two rails built on top to allow the charging post to run along with the bus, the next charging post will be on the rails before the earlier one leaves, that is why we call it relay charging. It is new invention, not available yet in other places.

The set here is super capacitor, a device that can charge, discharge and store electricity quickly. The power it stores during the stop can support the bus till the next stop where another round of charging takes place, achieving zero toxic gas throughout the process.

About the ultrasonic waves put forth from the end of the bus, that is to keep those high cars or trucks away from entering the tunnel. Using laser ray to scan, cars get too close to the passage will activate the alarm on the bus end. Inside the bus, there are turning lights that indicate a the bus is intending to make a turn to warn the cars inside. Also radar scanning system is embedded on the walls to warn cars from getting too close to the bus wheels.

Nowadays many big cities have remodeled their traffic signaling system, to prioritize public buses, that is to say when a bus reaches a crossing, red light on the other side of the fork will turn on automatically to give buses the right of way. Our straddling bus can learn from this BRT method. The car can make the turn with the bus if that is the direction it wants to go too; if not, the red light will be on to stop the cars beneath while the bus take the turn.

The bus is 6 m in width and 4-4.5 m high. How will people get off the bus if an accident happens to such a huge bus? Here I introduce the most advanced escaping system in the world. In the case of fire or other emergencies, the escaping door will open automatically. I believe many of you have been on a plane. Planes are equipped with inflated ladder so people can slide down on it in emergency. I put the escaping concept into the straddling bus. It is the fastest way to escape.

The bus can save up to 860 ton of fuel per year, reducing 2,640 ton of carbon emission. Presently we have passed the first stage demonstration and will get through all of the technical invalidation by the end of August. Beijing’s Mentougou District is carrying out a eco-community project, it has already planned out 186 km for our straddling bus. Construction will begin at year end.

This entry was posted in China, public space and tagged China, Public transport. Bookmark the permalink.

3 thoughts on “Honk! “Straddling” Bus? (Have a stupid weekend)”